TAHLTAN CENTRAL GOVERNMENT ASSERTS TREATY NO. 8 BANDS HAVE NO RIGHTS IN TAHLTAN TERRITORY

TAHLTAN CENTRAL GOVERNMENT ASSERTS TREATY NO. 8 BANDS HAVE NO RIGHTS IN TAHLTAN TERRITORY

Dease Lake, BC, January 23, 2021 – The Supreme Court of Canada (SCC) on Thursday denied applications by the Province of BC and the McLeod Lake Indian Band (MLIB) for leave to appeal a May 19, 2020 decision of the BC Court of Appeal ruling on the location of the western boundary of Treaty No. 8 in BC. The May decision upheld a trial decision that found the boundary within the language of the treaty lies along the Arctic-Pacific divide, which creates an overlap between the western part of Treaty No. 8 and Tahltan Territory. The Province and MLIB sought to appeal that decision to the SCC, arguing the Court of Appeal made various legal errors in its decision. With the SCC decision to not hear the appeals, the case is now over.

“The Tahltan Central Council (TCC) became involved in this case with intervenor status in 2013 to defend the title and rights of the Tahltan Nation” said Tahltan Central Government (TCG) President Chad Norman Day. Our Tahltan Nation has always asserted that the Treaty No. 8 bands have no connection to or rights in our Tahltan Territory. While we would have liked the SCC to hear the appeal, we are confident that the BC Court of Appeal decision is clear: nothing in this litigation establishes Treaty No. 8 rights in Tahltan Territory.”

The TCG was granted intervenor status in the case at both the trial and Court of Appeal and argued that a decision on the location of the western boundary does not mean the Treaty No. 8 bands have harvesting or other rights in that boundary area. Treaty No. 8 was intended to protect the traditional harvesting rights of the Treaty bands in their territories, and none of those bands have any history of use or occupation of Tahltan Territory. All three judges of the Court of Appeal agreed with the TCG on this point, clearly finding that a decision on the boundary does not establish any harvesting rights by Treaty bands in the boundary area.

“We expect the Treaty No. 8 bands, the Province of BC and Canada to respect and abide by the Court of Appeal’s decision” said Day. “The TCG respects the rights of the treaty bands within their territories and asks them to respect Tahltan title and rights in our territory. We will continue to take all necessary steps to defend our position and maintain our title and rights for future generations.” 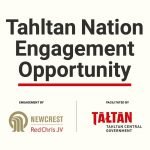